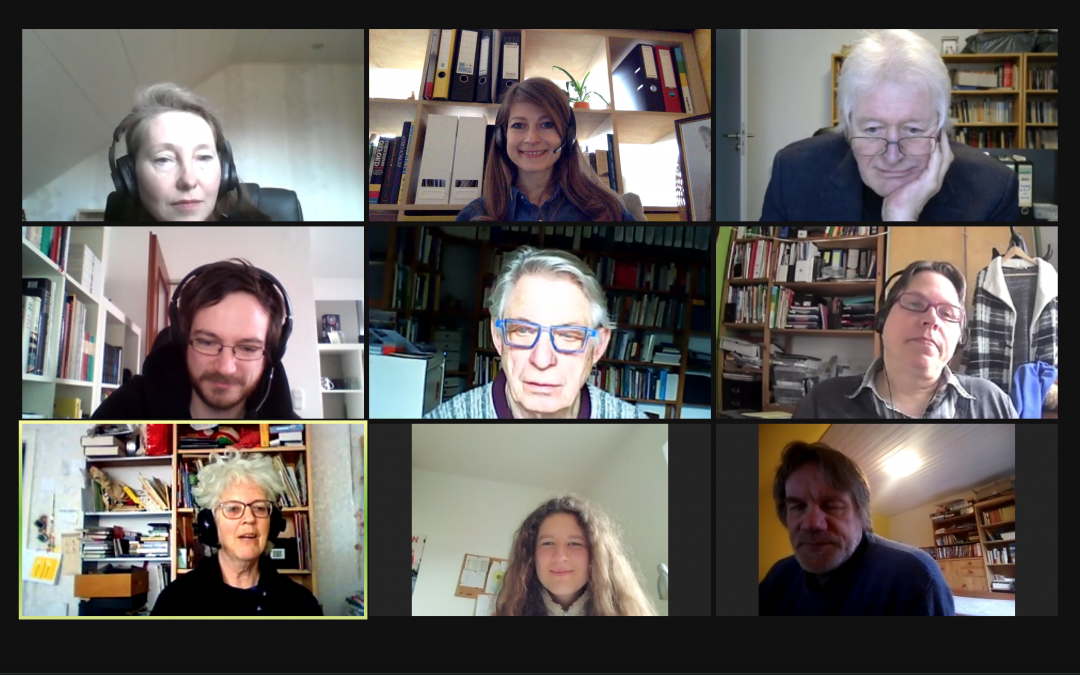 People attending: Zoryana, Veronica, Lawrence, Petra, Anastasiya, Michael, Richard, and Tilman. Steffi was in charge of the workshop and did a great job of encouraging us to work on our imaginary characters and led us through various exercises. There is a power point presentation of this workshop which will be posted to the Writers Ink website, so I’ll just give you some wee glimpses of what we came up with.

Instead of saying someone is fat, say: “The chair groaned under him”…..

We also described an activity, to create a picture in the reader’s head. Zoryana’s was:

Harry shifted a gear and let his right hand join his left in his lap, holding the steering wheel with just two fingers. The speed meter’s arrow soared up to 195 and the deafening roaring sound of the motor scared his passengers. John fidgeted uneasily in his seat.

Harry was miles away, at his desk, still deciding whether to use a triadic color scheme or go with just two complimentary colors in the new ad campaign. He raised his eyebrows, surprised by John’s remark.

–       Let’s look at this exploratively, Johnny. Life is too short to waste it in a traffic jam, and if we don’t reach Hamburg by 8, we’ll hit the traffic and one does not need to be a wizard to foresee the destiny of our beautiful morning.

–       The point of life being too short is exactly what I am trying to convey to you, Harry. It’s too short to shorten it any further. Do slow down or let me drive, for heaven’s sake.

The car in front of them would not change the lane despite Harry’s extensive blinking with headlights from afar, so the idea of tailgaiting at 180 km/h and teaching the front driver a lesson was the new toy. After a few moments of nearly crashing into the black Mini Cooper in front of them, which seemed like half an eternity to John, Harry honked and Mini frantically changed the lane. John caught a glimpse of the Cooper’s driver waving his hands and cursing as they took over. He turned his head to look at Harry again and saw that usual cat-like smile of sheer satisfaction jumping off Harry’s lips.

Yet again he made him look like a fool in front of other colleagues. He glanced into the side mirror and noticed Mary and Joy grinning widely in the backseat. Foolish flies trying to get into the web and begging the big fat spider to suck their life juices out of them, that’s what they were, John saw it clearly. Always messing up with wrong guys and later complaining that men are evil. A sharp turn made John cling on to the door handle.

–       I beg your pardon, ladies, – Harry briefly turned his head to the back to see the amount of emotions and pheromones he managed to release. Absolute success.

John knew there was nothing he could do, so he sulked and kept mum for the rest of the way as the red BMW was shooting through the German autobahns. At least the music was good. Of all the vices he hated about Harry, there was one virtue that undermined them all – his impeccable taste in all things beautiful.

I never cease to be amazed at the stories that seem to just pour out of our authors at / after the workshops! Chapeau, Zoryana!

Anastasiya transported us into a very different world with her piece:

She didn’t even look up. The pencil danced back and forth between the empty boxes of her sudoku game, neatly inputting numbers. The beginnings of liver spots marked the hand that held it.

>>No, I mean in general. What are you playing at with that ruffle dress? You never used to wear anything of the sort.<<

She pushed her plastic rimmed reading  glasses a little further down her aquiline nose, hunching over the journal page.

Whe she didn’t say anything, he continued.

>>And that horrible perfume!<< He jerked his thumb behind him, indicating the corridor where a small bottle stood on the shelf. >>I thought you hated that smell!<<

He was sure she was now feigning her immense concentration. A sudoku game couldn’t be costing someone like her THAT much effort.

>>People change with age.<<, she said after a pause filled only with scribbling noises. He raised his eyebrows.

>>So that’s what this is all about! You’re trying to turn into some Mon Cherie loving granny now, are you?<<

Her pencil slipped with a harsh scratching sound, the 3 she had been writing turned into a weirdly shaped 7.

>>Because it’s appropriate!<<, she snapped, turning a page with such a force it was a miracle she didn’t tear her copy of Sudoku Weekly appart.

>>So ruining your own life is appropriate?!<<, He yelled. Usually, he wouldn’t have dared speak to his mother this way, but that didn’t matter at the moment. His anger was pulsating inside him like some living creature.

>>You’re only 61! And you’re already acting as though life is long over! Look at you, wasting your time with some silly sudoku game! You could be doing so much more right now!<<

She stood up, wiping her head around to face him. Breathing just as hard as he was.

>>You don’t understand.<< She attempted to keep a level voice.

>>Yeah? Well, maybe I don’t! Hanging out with those gossip obsessed goats in the parc with a brain like yours! <<

>>You will not use such language in this house!<<

I’m leaving. I can’t watch you doing this to your self any longer.<< He stormed out of the living room.