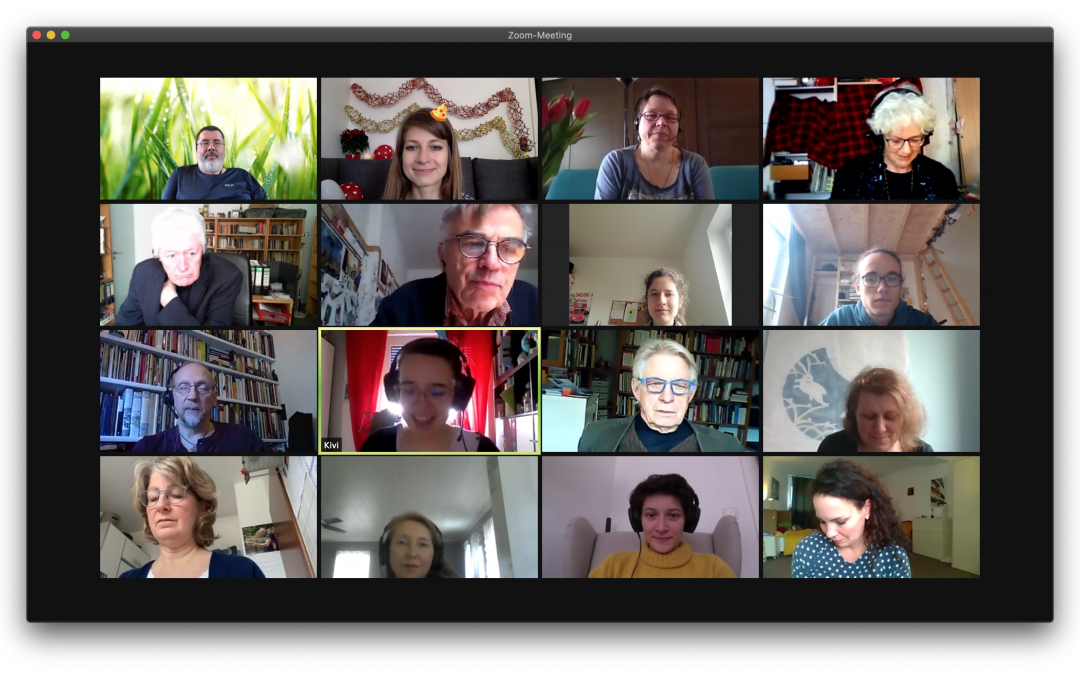 A birthday party to remember, folks! The drink was flowing (water and tea) and a good time was had by all.

Steffi had the tulips and Richard called in from Amsterdam, so Spring was in the air alright.

I’ll give you a general rundown of the people and what they performed, and upload their poems, stories etc. as I get them via e-mail.

We had streamers, funny headgear and digital special effects – the actresses in Paul Ekert’s play “The Writers’ Group”: scurrilous characters with all-too-human peculiarities, like a biscuit addict and a sex-obsessed authoress. Fun was had by all. I think the audience liked it, too. Members of the cast: Zoryana, Anna, Steffi and Veronica. Narrator: Stefan.

This was followed by a song from Zoryana, a wistful, dreamy text about rain that helps the singer “forget his face”. We should start setting up a Writer’s Ink concert with all the musical talent that’s evolved in this past Covid year.

Mike Bacon read several poems, and in one, he conjured up pictures of the Thames estuary, the mud flats out at Maplin and a drowning accident that claimed five lives many years ago: “Swirls sweep them out too far, winds stifle every sound, Nature claimed her rights once more”.

Oz Hardwick, our latest honorary member, popped in from Leeds and enthralled us with various topics. From the Big Bad Wolf as a shape-shifter, getting twitchy when the light fades, to the first origami-oriented heart operation, and then a poem from “Learning to have lost” in which the writer is holding a canary cage on his lap, looking across at a fellow passenger through double bars, like a prison. Oz takes his listeners by the hand and like the rabbit in Alice in Wonderland, leads them down wondrous, winding paths.

Steffi read from “Not a drop”, addressing the Red Sea: “Who deserves to live and who deserves to drown?” Cleverly crafted and thought-provoking once again. Followed by “Ghost”: ..”pushed by an algorithm that doesn’t know you’re dead”. A chilling reminder of how we actually live and die online.

Simone gives her three children their own magical childhood spheres of make-believe and transports this to the listeners: “Each step expanding her universe”. We don’t remember so far back, but Simone is recording the process with her poetry and so we are drawn into this world that’s only 3 feet high (that’s 36 inches).

Then I introduced my old family saying of taking a break: Take a run round the garden and a kick at the cat!

After maltreating multitudinous cats, we returned to listen to Ottmar’s reading from his book “Utopia, hopes and horrors” with “intuition, reason’s darker sister”, and the picture of the girls reading, “sharing a book in silent choreography”. Dreamy listening, feeling our way into this strange world with familiar things, like cheap petrol.

A newcomer was Uma Rabea with 2 poems, one a sonnet, on the environment, I think inspired by Greta. A universal topic that won’t go away and will become more and more central to our lives. When islands are taken by the ocean and their inhabitants displaced, glaciers disappear and animals starve – it all has to do with us. Well done, Uma! I’m also a huge fan of Sir David Attenborough.

I read some poems, “Heron” and “A jar” were 2 of them – dedicated to my late dad and my wee sister.

Richard read us “Temptation”, a teetering-on-the-edge rush of adrenaline. The great thing is, you can hear it often and still be shocked into awareness again. The second poem was to do with passing time, and I’ll post this, too.

Kivi was also a newcomer, and delighted us with 2 short poems about love, which reminded us golden oldies about those days of trembling anxiety and mood swings, depending on how our “going out with someone” was progressing.

A poem by Erin Hanson was Sonia’s choice and a great one it was. The grass is greener on the other side, so trite in pop songs, but here it was brutal reality. Thank you for bringing this one to our attention, Sonia.

We are currently processing the entries for DPP2022. We wish you best of luck!